A selection of photographs showing images of places around Athboy. While some of these images may also appear in our gallery of people they’re included here because they also include old buildings or shop fronts from around Athboy.

On the platform at Athboy Railway Station. Date unknown. Courtesy of David Gilroy

Photograph taken at Athboy Railway station. One of these men is identified as John Kavanagh. Courtesy of David Gilroy 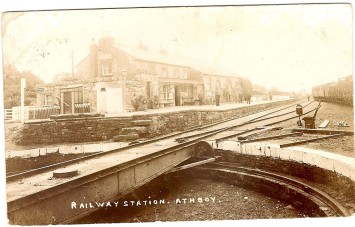 In the foreground is the “turntable” which was used to reverse the direction of travel of the steam engine at this , a terminus station. Credit: Phyllis O’Connor 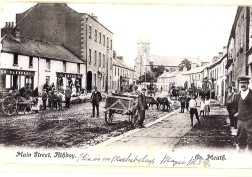 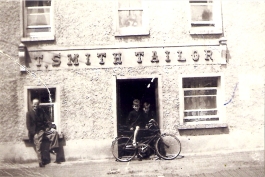 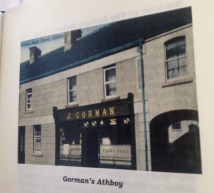 Now the site of McElhinneys. Courtesy of Des White.

Site for new Bank of Ireland (close up) Courtesy of Des White.

1925 announcement that the RIC Barracks would become the site of Athboy’s Bank of Ireland branch. Courtesy of Des White.

Dated about 1960. Behind the wall on the right was the back gardens of the Alms Houses Courtesy of Peter Coffey

This view of The Church of Ireland and Barrack Lane. The cottage in the foreground was near the gate of Danescourt. Dated circa 1960 Courtesy Peter Coffey 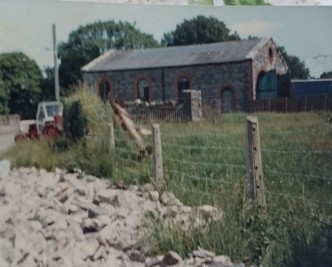 This is the gate lodge and entrance to Frankville House located on the Kildalkey Road. This gate and lodge were demolished to make a new entrance and school extension to the Convent of Mercy secondary school on this site.

Photo of Dan Reilly’s shop at the corner of Lr Bridge Street and the Trim Road. Centre is Dan Reilly with his wife holding daughter Beda. The boy with the bicycle is Michael Brogan. The flags and bunting are for the Eucharistic Congress of 1932.

This aerial view of Athboy is dated April 1953.

Aerial photo of Athboy dated 1955 (before the erection of the Fr O’Growney statue in 1956). On the bottom right is all that remains at that time of the walled garden of Athboy Lodge (later the site of Athboy Creamery)

One Reply to “Photographs – Places of Athboy”